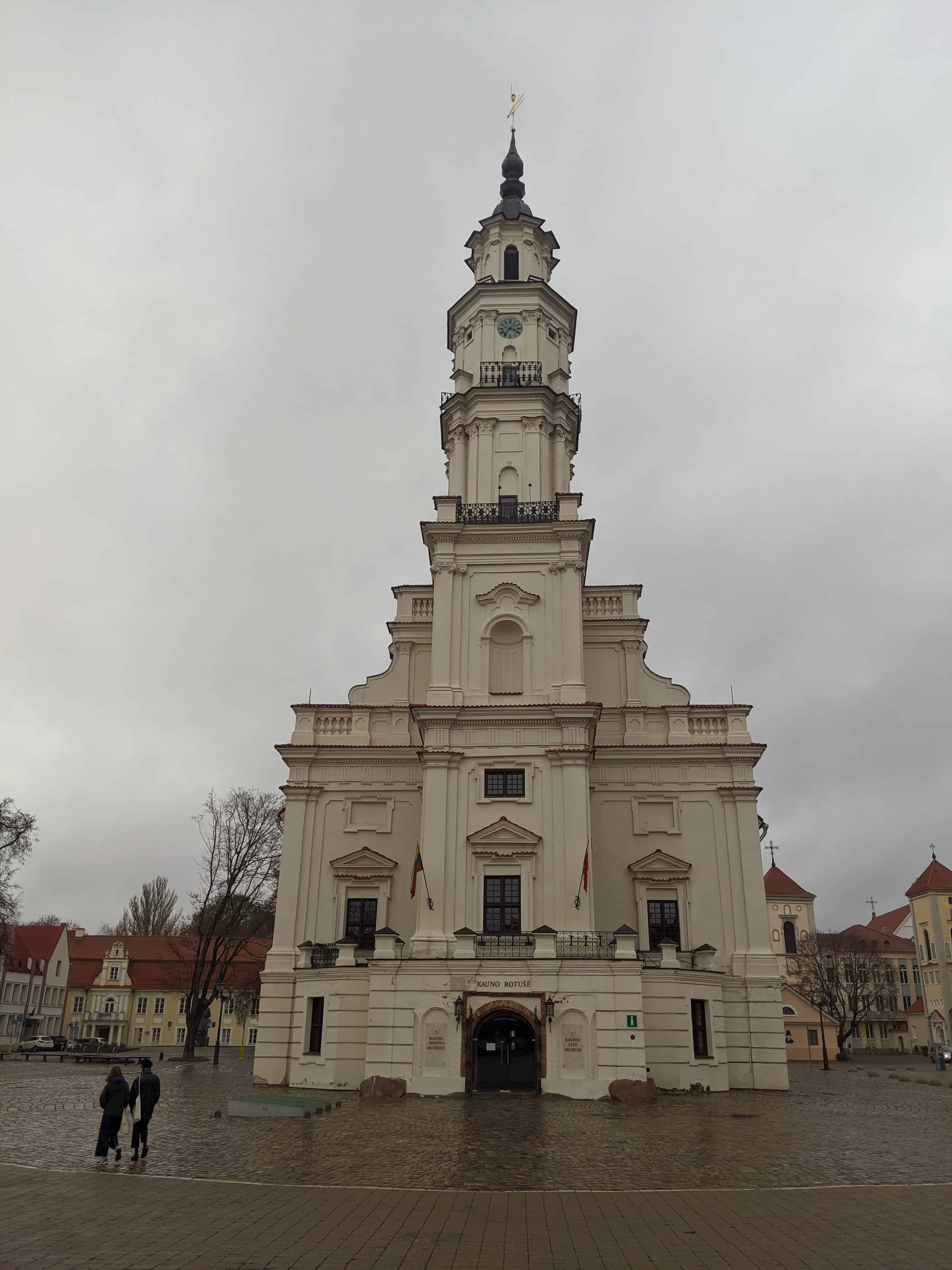 The drive from Vilnius to Kaunas was uneventful. I got checked into my hotel room shortly before 13:00, the ibis Kaunas Centre. The drive was quite pretty. Lots of farmland, trees and small towns and villages along the route.

The old town here was quite a bit further from my hotel that it was in Vilnius – about 3.2 kilometers or two miles. But, there was plenty of places to stop on my walk there. It was quite a bit cooler today, only in the mid to upper 40s Fahrenheit (around eight degrees Celsius). It wasn’t raining at first, but by the time I reached old town, it was raining pretty hard.

My first stop was Ramybės parkas, a park just north of my hotel, commemorating the partisans who fought and died during the Soviet occupation after World War II. I continued north until I reached St. Michael the Archangel Church, which marks one end of Laisvės alėja (Liberty Boulevard). I continued west on that road, passing by the central post office, built between the two wars.

My next stop was the historical presidential palace, from the years between the wars while Vilnius was part of Poland and Kaunas was the temporary capital. From there, I went to the old town itself.

The old town area of Kaunas was quite beautiful, with many old buildings that have been very well maintained. On the outskirts of it sits the Cathedral Basilica of Apostles St. Peter and St. Paul, a massive Gothic style church – the largest in Lithuania.

In the center of the square is the old Kaunas Town Hall, now a museum. Unfortunately, it was closed today (as were most of the museums I came across). The Church of the Holy Trinity is to the northwest of that building, as well as several other interesting buildings.

By then it was raining pretty hard, so I stopped into Hop Doc for a beer. I was getting pretty hungry, but nothing on the menu appealed to me. I went next to Entry for a bowl of salmon and horseradish soup.  Nearby was a tiny brewery, Avilys. They only have two beers on tap, but they had a beer cheese soup that was outstanding.

While I was there, I started looking at Untappd to see where people in the area were checking into. There were quite a few at a place called Vingiu Dubingiu not far from my hotel, so I started heading that direction. I only intended to have a couple there and find the next place, but a couple of locals started talking to me. One of them, Julius, saw my check-ins on Untappd and said to his friend, “We have a serious beer guy here!” We were soon joined a guy from Sweden here on business, Göran, and began an inpromptu bottle share. We each tried to get something the others hadn’t had before. That was easy in my case, as I had only a handful of Lithuanian beers so far, but much harder for Julius. One of the most interesting beers of the night was a sour beetroot ale, by the brewery Sakiškių Alus. It smelled and tasted exactly like that – beets.

That ended up being my last stop of the night. From there I walked south back to my hotel and crawled into bed. Not quite as many steps as in Vilnius, but still almost 20,000.

Today I drive a little more than two hours to the port city of Klaipėda.