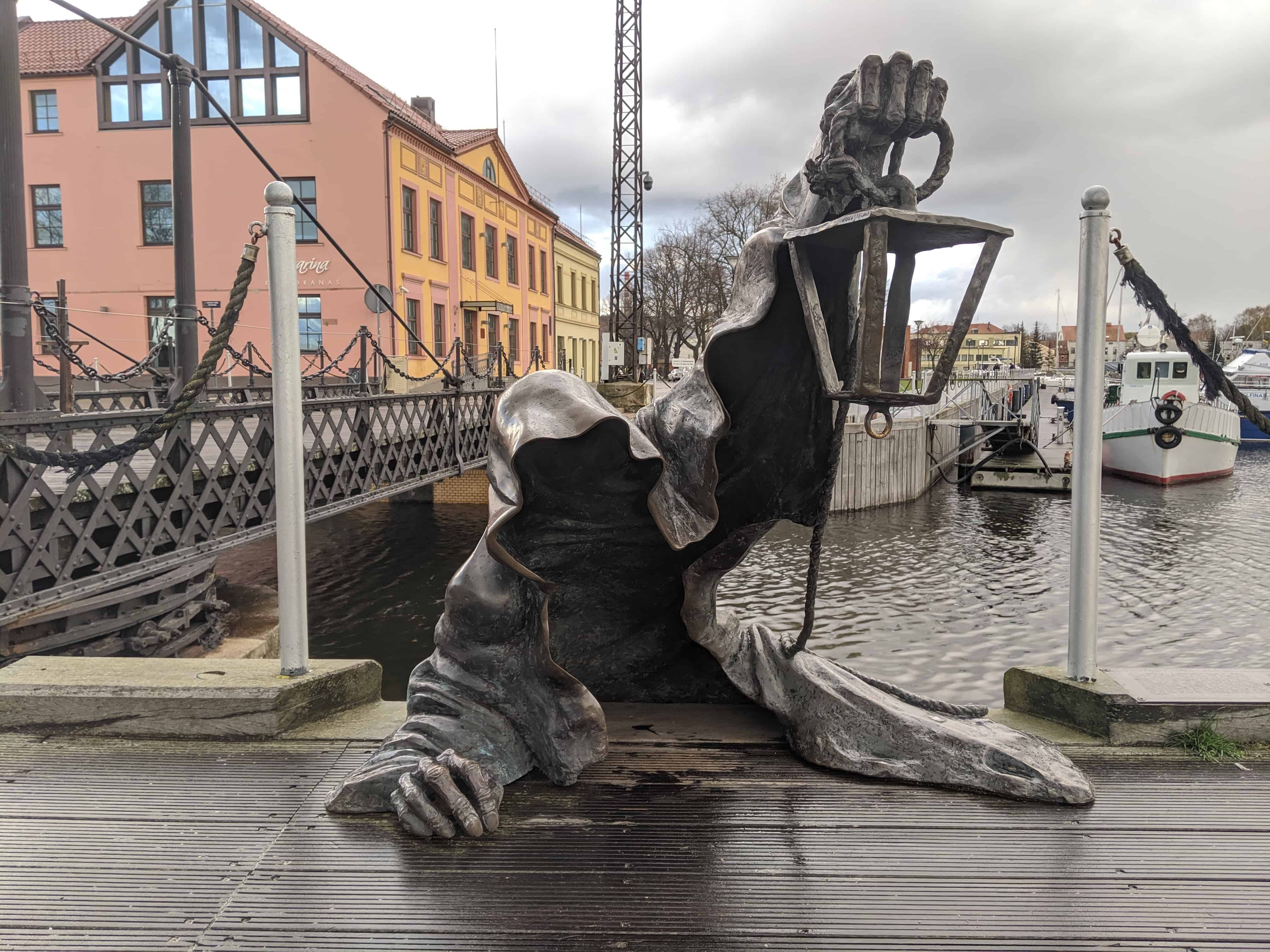 I left Kaunas a little after 10:30 and headed west on highway A1 to Klaipėda. Like yesterday, I drove through mostly farmland, with some forests breaking up the farmland. The trip started as a bright, sunny day (though cool, around 42 degrees Fahrenheit/5 degrees Celsius). Today I tried to pay a bit more attention to the license plates on the road. Most of them were Lithuanian, naturally, but I also saw plates from Russia, Poland, Norway and even Ireland!

By the time I reached Klaipėda a little before 13:00, it was raining hard, with some hail thrown in for good measure. That didn’t last long, though, and by the time I was ready to start exploring the clouds had lifted and it was mostly sunny.

The old town section of Klaipėda is centered on what is called the Theater Square. The streets – and sidewalks – are all cobblestone in that area, which are a bit tough to walk on (and even tougher to drive on, as it feels like the car is going to shake apart). Klaipėda was part of Prussia, then the German Empire, for a long time (called Memel then). You can still see a lot of the German influence in the architecture, particularly in the older parts of town.

I started by heading out to the port two see two of the famous sculptures there – The Black Ghost, and Childhood’s Dream (a boy with his dog). I then head into old town proper, where there were several other statues and sculptures – including a chimney sweep on top of one of the buildings.

It didn’t take me long to see all the things in the old town section that I wanted to see. I headed north past the central post office, then found a large park with hundreds of sculptures in it. Sculpture Park was the city cemetery until 1977, and there are still a couple of graves there. There’s also a Soviet-era monument to the fallen during World War II, and a monument commemorating the joining of Klaipėda to Lithuania in 1923.

After three days of walking, my legs were quite tired. I headed back towards old town, stopping in a couple of places for a beer. I ended the night at Švyturys BHouse. Švyturys is Lithuania’s second oldest brewery, and originally founded in Klaipėda. They are now a macro-brewery (part of Carlsberg), and most of their beer is nothing special. But the atmosphere of the place was nice, and I had a delicious bowl of fish soup that they cook for 12 hours.