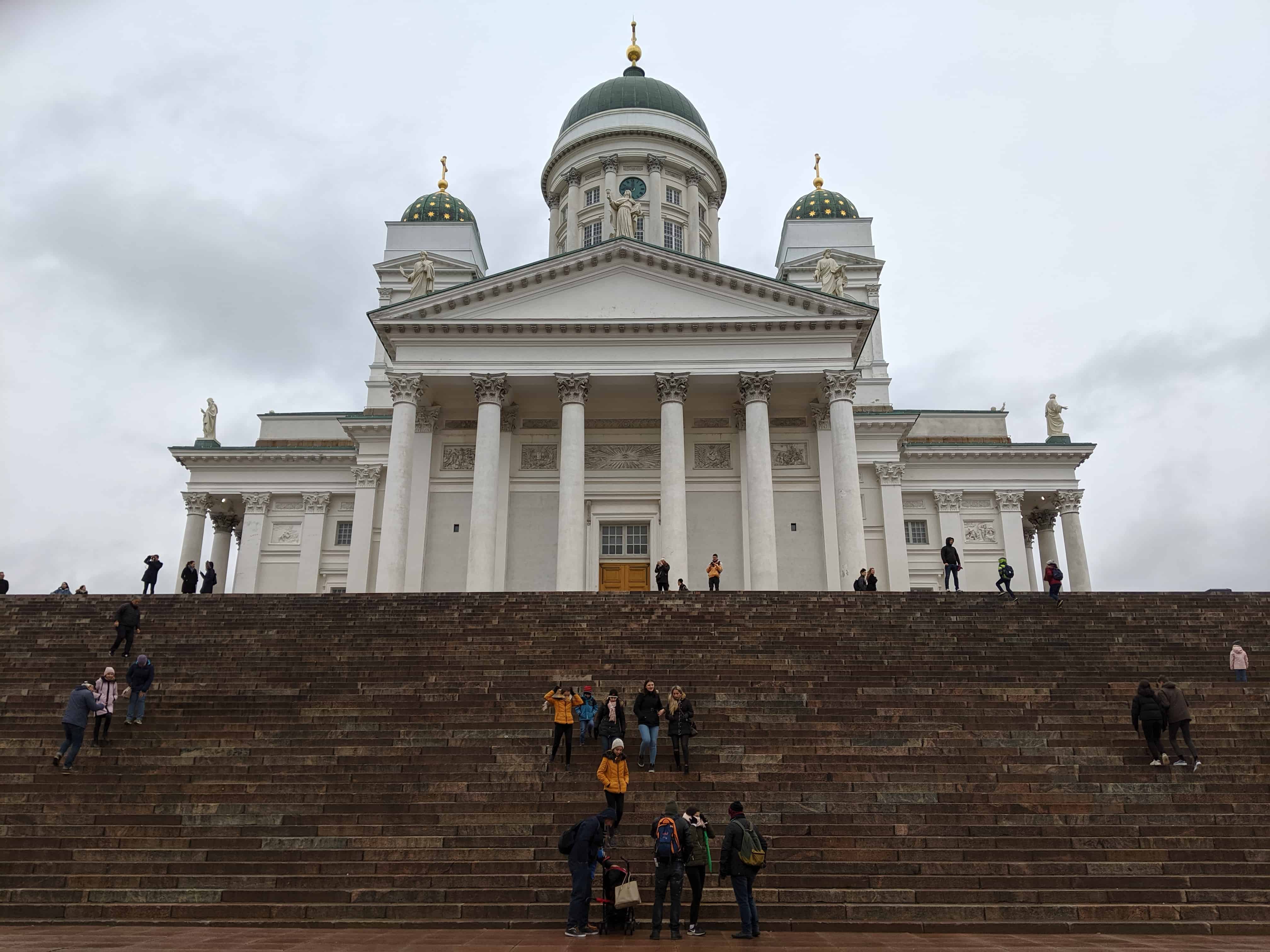 Lori and Michelle had been severely delayed, so I wasn’t going to meet them until around 20:00 now. That gave me more free time to wander around, so I took advantage of that. I left the hotel around 10:30 and took the tram to Esplanadi park downtown, and had a ham sandwich and cappuccino from Café Esplanad.

Now ready for the day, I walked through the park and then to Helsinki Cathedral, a gleaming white Lutheran church not far from the waterfront. Originally called St. Nicholas’ Church as a tribute to Tsar Nicholas I in the mid 19th century. From the steps, you have a nice view of Senate Square.

After that, I made my first attempt to visit Uspenski Cathedral, the largest Orthodox church in western Europe. Unfortunately there was a sign on the door that it was closed to tourists for church services, so I headed west to the Old Market Hall, a sort of farmer’s market with lots of shops to buy food or stop for a bite to eat.

Next on the list was the Design Museum, near St. John’s Church that I had visited the day before. This museum houses exhibits on Finnish design and culture, as well of several large collections of things like shoes, ceramics, fashion, etc. It was interesting, but not really my thing.

I was getting hungry again, so I went back to the Old Market Hall and had a meat pie and a beer. It was now 15:30, so my final destination of the day was now open. After a quick stop by Uspenski Cathedral to see if it was open to tourists yet (it was not), I headed northwest to Temppeliaukio Church, also known as the Rock Church.

Temppeliaukio Church is a beautiful, modern Lutheran church completed in 1969. A competition was held for the design in the 1930s, but work on it stopped in 1939 due to World War II. A second competition for the design was held in 1961, with brothers Timo and Tuomo Suomalainen winning with a scaled back version of the original concept.

It was starting to get dark, so I walked 15 minutes back to my hotel to relax for a bit before heading out to meet Lori and Michelle. We met at their hotel down at the waterfront, then walked to Savotta, a Finnish restaurant recommended to them by their taxi driver, an American who now lives in the area. We had an appetizer of braised bear meat, then we each ordered different dishes and shared. I ordered the “Topside roast of reindeer and elk sausage”, Lori the “Pan-fried whitefish”, and Michelle the “Salmon baked in sour cream”. All of them were delicious, but my favorite was the reindeer meat.

They were quite tired from traveling and especially the delays, so they headed back to their hotel. I stopped by a couple of beer bars I had seen but not yet visited, then headed back to my hotel for the night.

Today is a travel day, as I’m taking the ferry from Helsinki to Tallinn, Estonia. Tomorrow I’ll have a city tour in the morning, but after that it’s mostly meetings and activities related to the JCI World Congress.