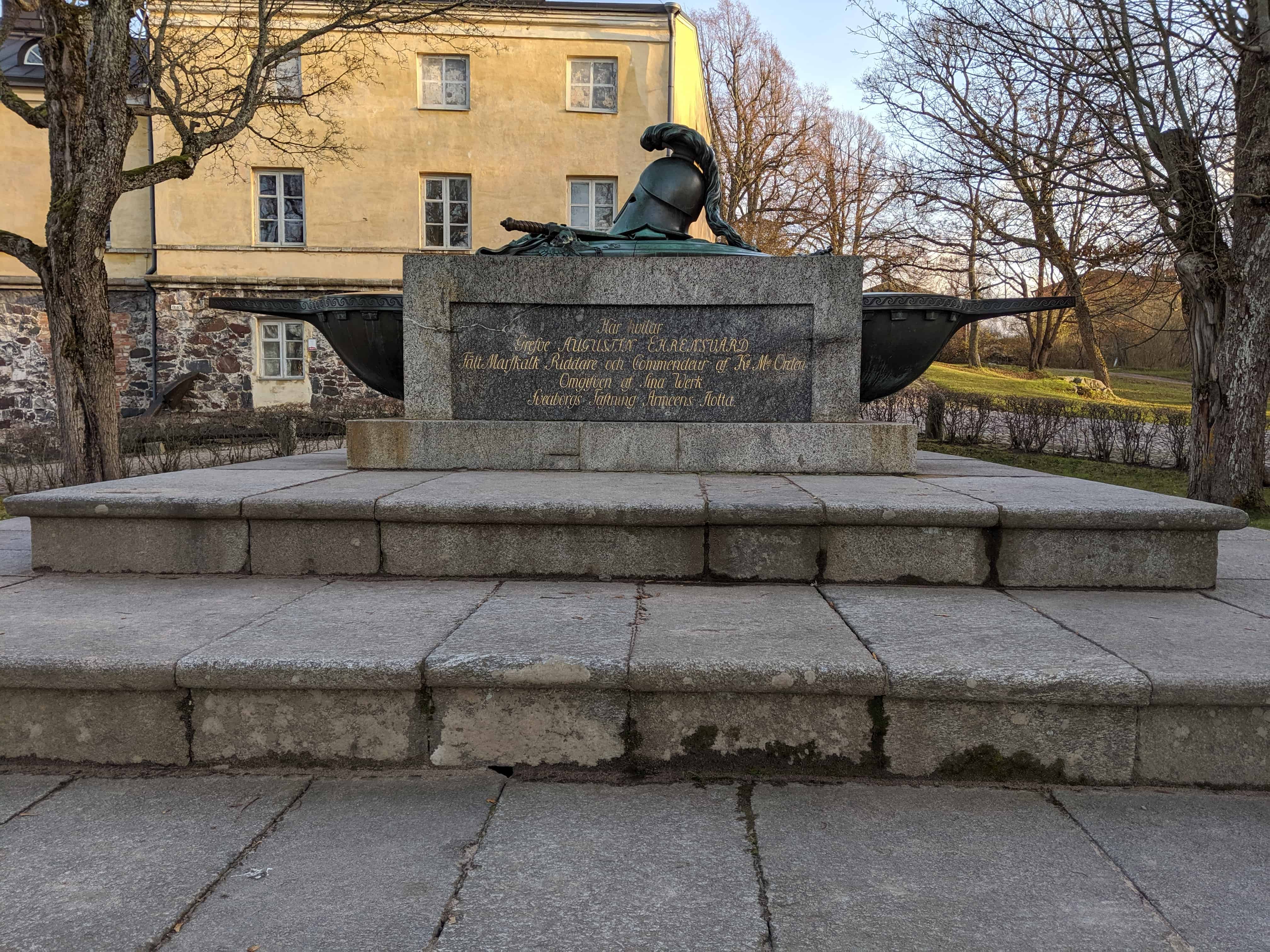 Using the tram system is simple. There are options, but I just installed the HSL phone app and bought a zone A-B two-day ticket for €12. After that, you just get on and off the tram as needed. As long as you get on the right tram, it is easy. Helsinki also has buses and a subway, but I’m probably not going to use those. The trams look like they will be able to take me anywhere I want to go.

I left my hotel at 10, and stopped at a near-by café/souvenir shop for a sandwich on traditional Finnish bread and an espresso. From there I walked to the National Museum of Finland. It didn’t open until 11, however, so I walked past the National Parliament Building and then on to a nearby park. There was a small protest going on there, “Grandparents for a Better Environment” I’m told. When I went by a couple hours later, they were gone – replaced with a couple of people protesting for animal justice.

The national museum is really impressive, covering events and artifacts from pre-history through the present. The displays are spread out mainly on two floors, with things before the modern era on the basement level, and Finland from Swedish rule to present on the second floor. I easily spent a couple of hours here, before heading off for the next place.

It was a bright, sunny day (though cold, not much above freezing). The forecast for Saturday was rain most of the day, so I figured I should take the trip to the Suomenlinna fortress, a massive maritime fortress spread across eight islands. I, however, did not pay attention and got on the wrong tram. Once I realized it, I was fairly far from where I would catch the ferry to the islands.

I had seen St. John’s Church not far from where I got off the tram, so I went there to check it out. It is a large Lutheran church build in the late 19th century. It is the largest stone church in Helsinki, according to seating capacity.

I left the church after about ten minutes, and headed to a tram stop that would take me near where I catch the ferry. The cost for the ferry is only €5 for a one day pass. The ferry itself takes about 20 minutes to reach the fortress.

Work on the fortress started in 1748, while Finland was part of Sweden. The Russians took it in 1808, starting over 100 years of occupation of Finland by Russia. When Finland won her independence in 1918, the fortress was controlled by the Finnish defense department. Most of the complex is under civilian control now, though there are still some places under military control.

I spent most of the two-and-a-half hours I was there walking around, going through the exhibits, and taking pictures. It is hard to get a scale of how massive that place is, but I probably walked about five miles while there. There is also a brewery on the complex (Suomenlinna has about 900 permanent residents there), so I stopped and had a couple of beers while waiting for the next ferry back.

It was starting to get dark, so I was off in search of beer and food. I had a couple of recommendations from Untappd. The first, Kaisla, had a huge selection of beers, one of the largest I’ve seen. However, it was very crowded, and their food menu was quite limited, so I continued on after a pint.

The next recommendation was also very busy, and I was more interested in finding food at that point. I wandered around the city center district in search of something to eat. Most places either had long lines, or long waiting times to get your food. I finally stopped at Stone’s Beer and Burgers. While I would have preferred something more authentically local, I have to admit the burger was one of the best I’ve ever had.

I decided to call it a night after that, and headed back to the hotel. Today there are several more places I want to see, and I’m supposed to meet up with my friends Lori and Michelle around 3.