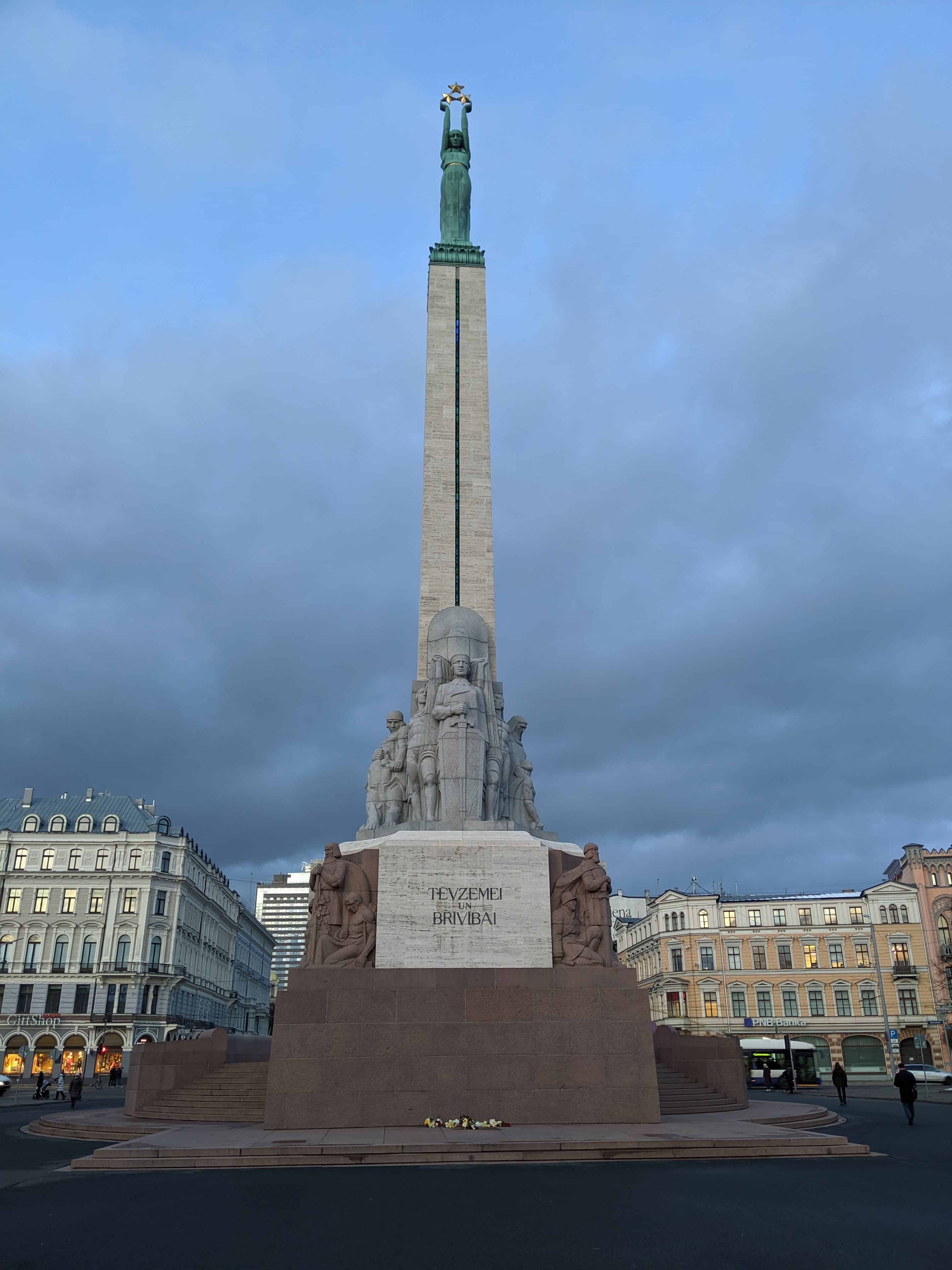 (edit: gallery has been added)

Google presented me with two routes to Rīga, Latvia. The faster of the two was a bit longer in distance, and retraced a good chunk of the route I followed the day before. The other route was slightly longer, but looked like it would be more scenic. It also got me into Latvia faster than the other route. I chose that one.

I had thought about taking a detour that had been recommended by Julius in Kaunas. He had suggested I visit the resort town of Nida, Lithuania. While it was only 30 miles/50 kilometers away, Google Maps said it would take 1.5 hours to get there! Since that would add another three hours minimum to my trip today, I decided against it.

Unlike the previous two days of four lane divided highways between the cities, this route was nearly all two lane highways (and a short stretch of dirt road). It also took me through quite a few small Lithuanian and Latvian towns, which was nice. It also took me through some dense forest areas, including Žemaitija National Park (Lithuania) and Ķemeri National Park (Latvia).

One thing challenging today was knowing how fast to drive. In most cases, the speed limit wasn’t posted on these two-lane highways. There would be signs for when the limit dropped (going through a town, for example), but no sign indicating what was after that. I suppose it must be one of those things that is just known (I have since looked it up). I generally tried to get behind a vehicle that seemed to be going a reasonable speed.

Crossing the border into Latvia was no different than crossing a state border in the USA. I crossed just south of Ezere, Latvia, over a river. There was a sign for Latvia on the other side…and that was it.

I had to stop for gas along the way. Since I didn’t know how much different it would be from a typical trip to the gas station in the USA, I chose one that wasn’t very busy. But, it really wasn’t any different (other than you have to pay inside; there was no option to pay at the pump).

I also experienced snow for the first time this season. At about 30 miles/50 kilometers to go, it started snowing, pretty hard at times. By the time I reached city limits, though, it had stopped and the sun was shining. There is snow on the ground here, though.

I checked into my hotel – just across the Daugava River from old town Rīga – around 1:30. It was colder today than it had been (upper 30s Fahrenheit/around 3 Celsius), so I put on my heavier coat and walked across the bridge into the heart of old town.

Old town Rīga was beautiful! around every corner of the winding, cobblestone roads was another church, plaza or interesting old building. I paid the fee to go to the top of the tower at St. Peter’s Church and was rewarded with a spectacular view of the city. From there, I visited the Riga Synagogue – the only one not to be burned down with the Nazis occupied Latvia.

After that, I wandered around old town, stopping at various churches and landmarks. I ended my sightseeing tour at the Freedom Monument, after passing the Powder Tower, which houses the Latvian War Museum. I would have liked to tour that, but I got there 15 minutes before closing, and they were taking no more visitors.

It was getting dark by then, so it was time to find a beer and figure out where to eat. I stopped at Ms&Mr Beer, a new (since August) taproom with a huge list of beers. On the recommendation of the bartender there, I then went to Folkklubs Ala Pagrabs for some delicious, authentic Latvian cuisine (beef cheek). I visited a few more bars after that, then headed back to my hotel.

Today I return the car and fly to Helsinki at 18:30. I will have time to kill, so I have to figure out what to do. I have a few recommendations from locals on where to go.